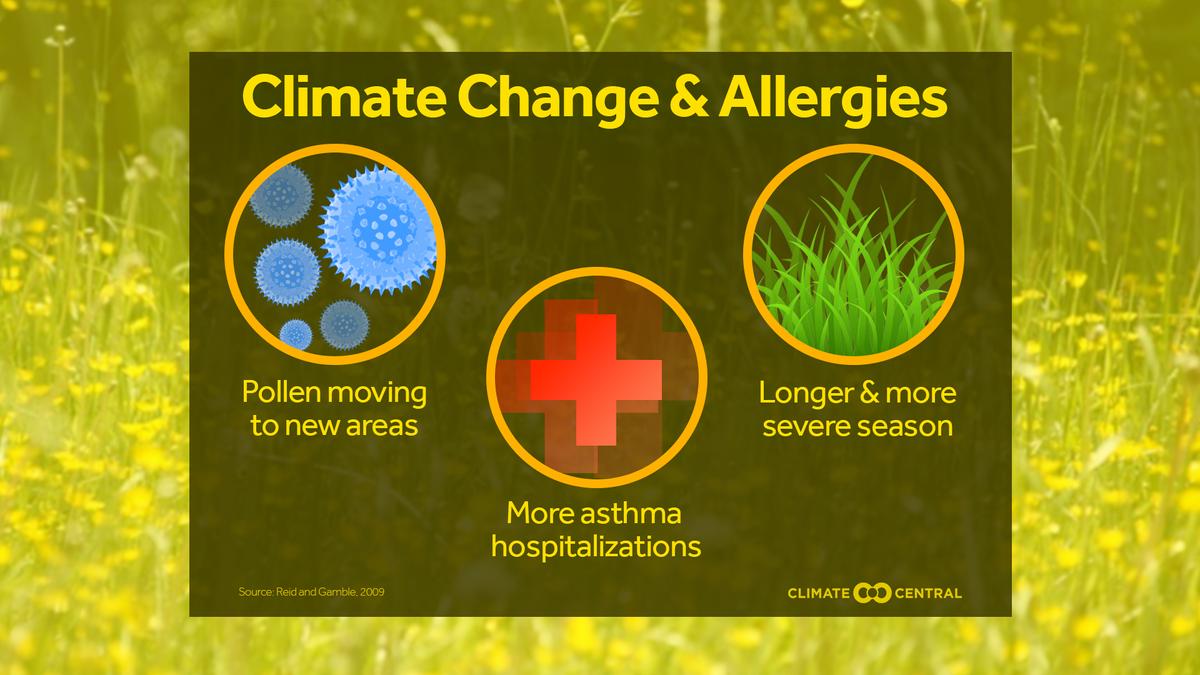 More than 50 million Americans suffer from allergic rhinitis (allergies) for a few months of the year due to pollen from trees, grasses, and spores. Unfortunately, the season of stuffy noses and sneezing will only get worse. According to a new study, climate change is causing pollen seasons to lengthen and intensify. Warming temperatures and rising carbon dioxide levels will stimulate plant growth and result in a longer growing season. Researchers found that if greenhouse gas emissions are not cut back, the season could extend by almost two months and release 200% more pollen by 2100.

An extended pollen season has significant implications for public health and health care costs. Allergies are the sixth leading cause of chronic illness for Americans and cost over $18 billion annually. As climate change contributes to worsened air quality and increased pollen release, the risk of asthma and allergy attacks will be on the rise.

Another study regarding the effects of climate change on human health found that climate change has altered antigen exposure, leading to an increased prevalence of immunologic diseases and seasonal allergies. While scientists have come up with better technology to forecast pollen waves, the only solution to lessening the impact of pollen season is to prevent it from getting longer and more intense; essentially, to drastically cut carbon emissions.

Depictions of allergies exist throughout human history, from Chinese doctors describing a “plant fever” that caused runny noses 3000 years ago to evidence that the Egyptian Pharaoh Menes died from a wasp sting in 2641 BC. Nobody quite understands why the human body is allergic to certain things, but in the last few decades, the prevalence of allergies and asthma has increased at a concerning rate. Worsening air quality due to pollution and climate change, vitamin D deficiency, and less exposure to germs are leading theories of the rise in allergies.

Studies have shown that early exposure to potential allergens decreases the risk of allergies developing in children. Outdoor play and introducing various foods into their diets could potentially protect kids from some allergies. Still, climate change continues to negatively impact the human immune system and microbiome -- the body’s natural line of defense to illness and disease.

World War Zero: A Conversation on Health and Climate, August 6, 2020.