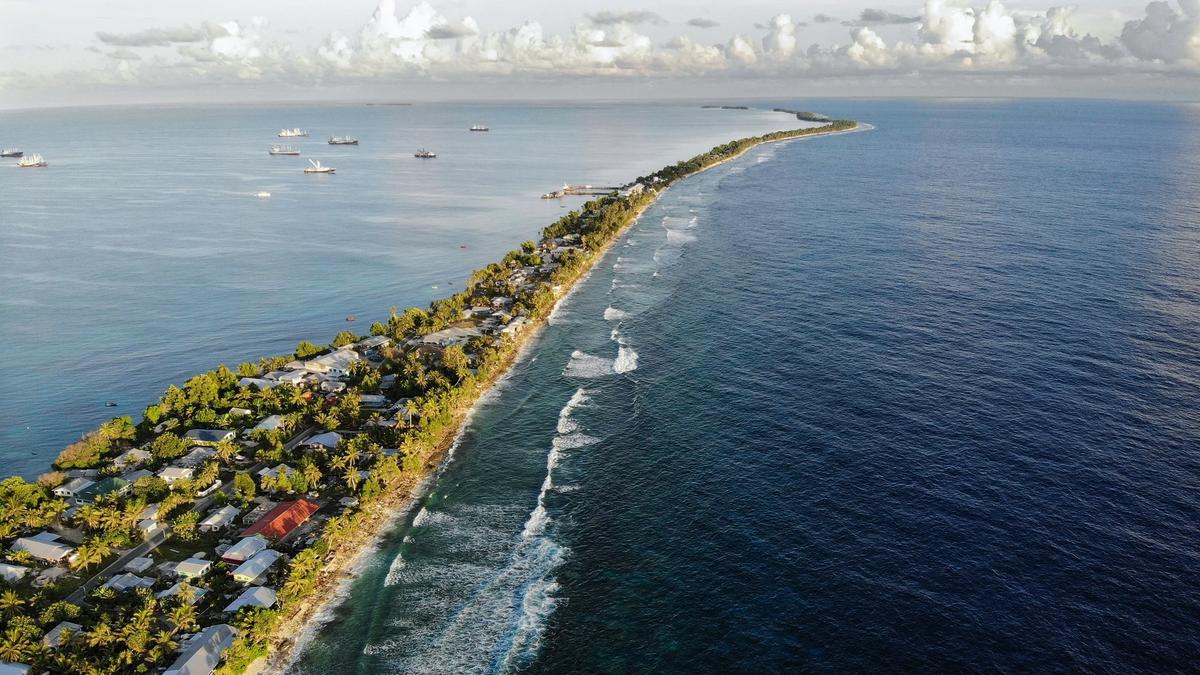 GLASGOW, Nov 5. -- Capping off an unprecedented week here at COP26, "Ocean Action Day" offered up some extraordinary events focused on oceans within the climate sphere. SPEC Kerry often says "you can't solve climate change without saving the oceans, and you cant save the oceans without solving climate change," and has worked from day one to connect the two challenges. That same message was loud and clear at COP. The Ocean for Climate Declaration rallied over 100 signatories calling for governments to include ocean conservation initiatives within their formal emissions reductions commitments. In parallel, 16 countries signed the Because the Ocean Declaration to reduce international shipping emissions and invest in clean offshore renewable energy.

Since the '80s, our seas have sequestered 20-30% of global emissions (approximately 40% since we started burning fossil fuels) and have absorbed 90% of the heat since the industrial revolution. Yet ocean systems are breaking down due to climate change, overfishing, and plastic pollution. Coral reef ecosystems, which support 30% of the ocean’s biodiversity, are on the brink of collapse. If we reach 1.5 degrees Celsius in warming, they will be wiped out. On Friday, the Global Fund for Coral Reefs was launched with ambition to raise $625 million for coral reefs over the next decade. But the clock is ticking for our reefs -- as the planet has already warmed 1.1 degrees Celsius.

"We are stripping life out of the ocean at an extraordinary rate. Just as quickly we are filling it with trash," said Lord Zac Goldsmith, environment minister from the UK. "There is no pathway to net zero -- or any of our shared global goals -- that does not involve protecting and restoring nature, including the ocean, on an unprecedented scale."

The UK delegation, host of this year's negotiations, is leading a Global Ocean Alliance, which has rallied over 100 country commitments to protect 30% of our oceans by 2030. Costa Rica's Environment Minister Andrea Meza, a star of this year's negotiations, announced her country will reach their marine 30x30 goal by 2022, eight years ahead of schedule. And on Tuesday, Costa Rica announced they will join forces with Panama, Colombia, and Ecuador to connect and expand their nation's marine protected areas in an "ocean highway," called the Eastern Tropical Pacific Marine Corridor. New protections will create a no-fishing zone spanning more than 200,000 sq miles, protecting critical migratory routes for whales, sea turtles, rays, and sharks.

At the US Center inside COP26, SPEC John Kerry and Assistant Secretary of State Monica Medina joined hands with President Whipps of Palau to pose a 90-day challenge for countries to ramp up ocean protections ahead of the Our Oceans Conference in February 2022. This high-level gathering, which Kerry created as Secretary of State, will take place held on Palau, a Pacific island that stands to lose everything from sea level rise and ocean systems collapse.

We had the chance to speak with President Whipps for a brief interview. "Solving the climate crisis is solving the ocean crisis," said President Whipps. "As a large ocean state we are doing all we can to do our part, and that's all we ask from the rest of the countries around the world. 'Do your part,' and we can turn this around."

To bring our oceans back into balance, scientists are telling us to: 1) stop burning fossil fuels, and 2) protect and restore "blue carbon" sinks like mangroves, salt marshes, and kelp forests. Countries are quickly developing plans to capitalize on the ocean’s previously free carbon capturing services through "blue carbon" credits. On Friday, Netflix announced the Blue Carbon Buyers Alliance alongside Disney, Salesforce, and Google to "send a clear market signal" that companies are ready to invest in coastal ecosystems protection and restoration.

In response, a protest against carbon markets erupted Friday morning inside COP26. Many indigenous communities and some climate justice advocates are angry, arguing that a) offsets will give a license for companies and countries to keep polluting, b) carbon projects threaten indigenous land rights, and c) ascribing dollar signs to nature desecrates the sacred Earth.

Carbon markets are a major sticking point inside the negotiating room this year, as nations battle over how to write the rules for trading emissions. Stay tuned -- we expect to hear news of a carbon market agreement in the coming days. For a deeper dive into the COP26 carbon market negotiations see our longer piece here.

GLASGOW, Nov 6. -- Saturday was a tale of two theories of change for the climate movement here at COP26. On the streets of Glasgow, approximately 100,000 people -- braving the cold and rain -- marched and chanted, demanding an immediate end to fossil fuel combustion. Inside the convention center, government representatives pressed on, negotiating the detailed terms of Paris Agreement implementation one word at a time.

Saturday's demonstration here was just part of a Global Day of Action for Climate Justice which mobilized the masses to take to the streets on almost every continent. "We must demand our leaders treat the climate crisis like a crisis," said 24-year-old Ugandan climate activist Vanessa Nakate, speaking at a rally here. "We must demand our leaders stop holding meaningless summits and start taking meaningful action."

Erin Booth with friends on a train from Edinburgh to Glasgow. (Photo: Kyle Lemle)

The trains to Glasgow overflowed with people from all over the world, coming here to flex the only power many of them have at their disposal -- their presence and their voices. I spoke with eleven-year-old Erin Booth from Edinburgh who sat across from me on the train with her two friends. "We shouldn’t have to give up our Saturday for this," she told me, holding a sign that read: "It's now or never."

Young people have a lot to be mad about. According to this just released UN synthesis, carbon emissions are on track to rise by 16% by 2030 -- a far cry from the 50% cut needed by 2030 to keep global temperature rise to 1.5C. While emissions projections are down 16% from two weeks ago after 14 new national pledges were included from COP26, it's still not nearly enough to prevent catastrophic warming.

Meanwhile inside the UN summit halls, it was Nature day. Following big announcements on reversing deforestation during the World Leaders Summit on Tuesday, we saw 45 governments pledge urgent action on Saturday to reduce emissions from land use, agriculture, and forestry. Approximately one-fifth of global greenhouse gas emissions come from the land sector, with the majority coming from energy. Governments pledged over $4 billion in new investments towards agricultural innovation, and Canada alone announced CDN$1 billion for supporting nature-based solutions to climate mitigation and adaptation overseas.

In more good news for land conservation, Nepal, Madagascar, and Mauritania announced they will join the High Ambition Coalition for Nature. This group, chaired by Costa Rica and France, has secured commitments from over 50 nations to protect 30% of their respective natural areas -- both land and sea -- by 2030. And, at an event showcasing nature-based solutions at the US Center inside COP, Costa Rica's Environment Minister Andrea Meza spoke of her country's world-leading model, "we have managed to put nature as a central part of our development model...understanding we will not achieve the 1.5 goal without having healthy ecosystems."

Wade Crowfoot, California Department of Natural Resources Secretary, echoed Meza's remarks. "In California we are the 5th largest economy in the world. We have effectively decoupled economic growth with carbon pollution," said Mr. Crowfoot, adding, "We have not done enough to maximize sequestration on natural and working lands." California has committed to 100% carbon-free electricity by 2045 and is ramping up a plan to protect and restore the state's natural carbon sinks.

While California was out in front on progressive climate policy, the rest of the US is trying to catch up. An unprecedented bipartisan delegation of 18 US senators at COP26 had much to celebrate Saturday after Congress passed a $1.2 trillion bipartisan infrastructure bill, which includes $90 billion earmarked for domestic climate resilience and adaptation. Thats the single largest federal climate investment yet -- and it isn't even "the climate bill" itself.

The Biden Administration's major climate legislation -- more than half a trillion dollars in clean energy deployments and investment -- is days away from a vote, hanging in limbo in Congress. "This is a moral clarion call to stop any international financing of fossil fuels. Shut it down. We are not going to allow it to happen anymore," said Senator Ed Markey from Massachusetts, chairman of the Senate climate change task force, speaking from the US Center at COP26. Capping a strange and powerful day of reform and resistance, Senator Markey spoke to the elephant in the room, "It's a good thing somebody is protesting outside."

See our coverage of the previous days at COP26: