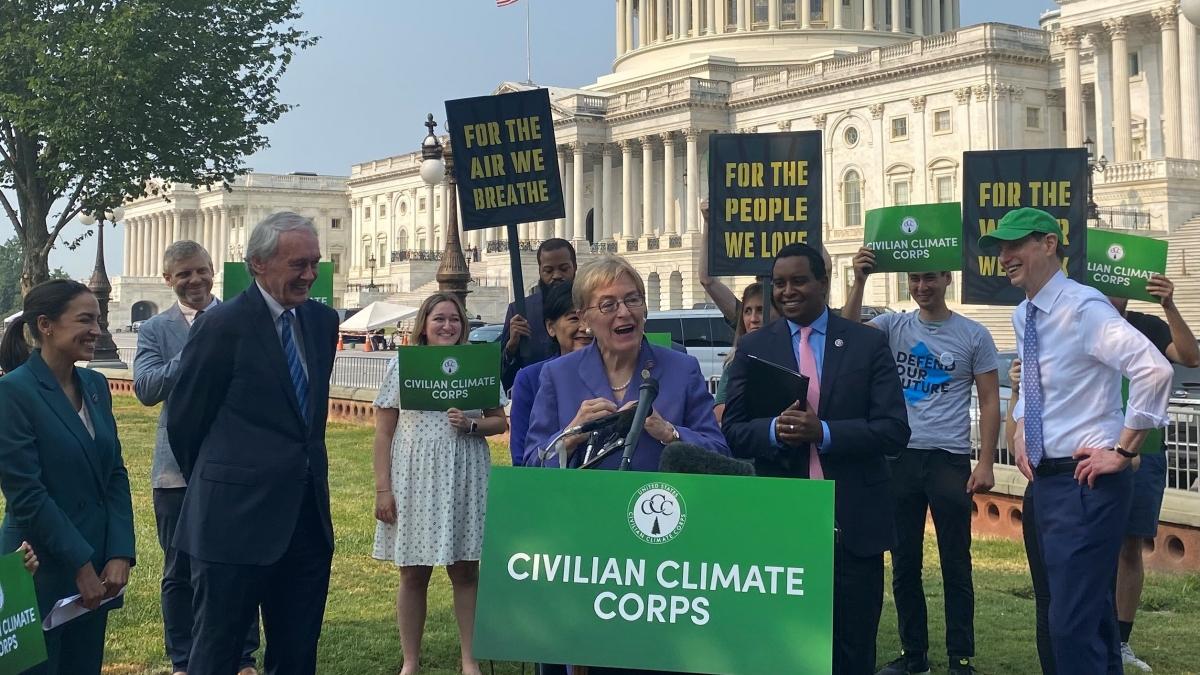 Echoing back to FDR's Civilian Conservation Corps, a new Civilian Climate Corps would employ young people across the country in government jobs to take on the climate crisis. The modern corps was first introduced as legislation by Ohio Rep. Marcy Kaptur in 2008 and was re-articulated as a Sunrise Movement priority last year.

Now, the idea is moving closer to reality. This week, more than 80 Democratic legislators put forward a letter laying out their vision, which could be funded through the American Jobs Plan and next year's budget. Its stated goals are:

Climate change is the defining issue of our time, and a Civilian Climate Corps would take on the long-term crisis at hand while also addressing the shorter-term crisis of job loss from the pandemic. With the proposed $15 minimum wage, it could launch members into future careers in clean energy, conservation, and disaster mitigation after being paid a living wage through the learning curve. It's a win from all sides.

"We have a historic opportunity to make bold investments in our public lands, clean energy, and climate resiliency, all while creating good-paying jobs, building a diverse workforce, and strengthening career pathways," the letter reads.

For all the nostalgia about the original CCC, it effectively only hired white men and developed on Native land without consent. This iteration calls for jobs, with justice at the center: "prioritizing environmental justice and investing in an equitable and diverse Corps membership" through actions like recruiting half of the corps members from communities harmed by American's environmental and climate policies. It also specifies that projects should be coordinated with Tribal communities, not done against their will.

A Boon for National Parks and Local Communities Alike

The original Civilian Climate Corps was integral to the development of the National Parks we know and love today, and a modern version could help get them in shape for the future. The National Park Service currently has a nearly $12 billion maintenance backlog that could be taken on by the corps, helping to "ensure our public lands remain healthy, supporting strong ecosystems and biodiversity."

It wouldn't just be about the wilderness, though. As Evan Weber, the Sunrise Movement's political director, told the American Prospect:

For us, the idea of a public jobs program that connects a new generation of Americans with their communities, with the government in a different way, and with the environment is in and of itself a non-reformist reform that can have societal ripple effects.