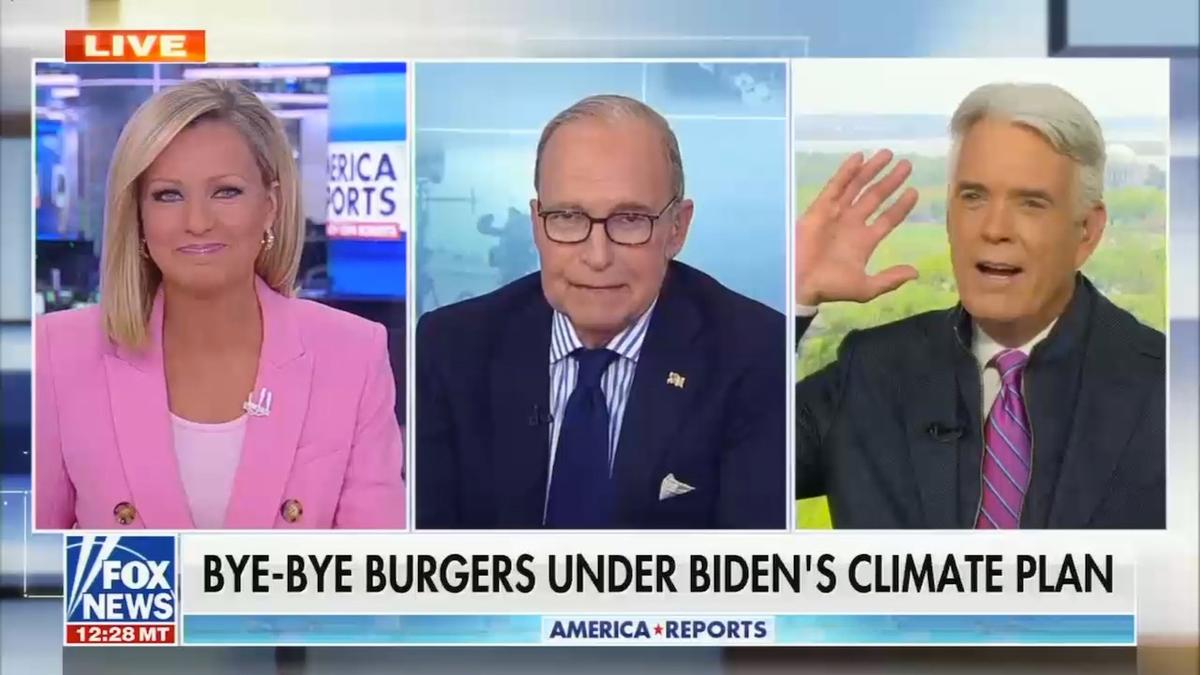 In late April, seemingly out of nowhere, Fox News reported that President Biden had a plan to force Americans to cut 90% of red meat from their diet, limiting them to a single hamburger per month, to achieve his goal of cutting greenhouse gas pollution in half by 2030.

Within 24 hours of a prominent discussion on Fox and Friends about this supposed "burger ban," darlings of the far-right such as Donald Trump Jr., Lauren Boebert, Marjorie Taylor Greene, and Governor Greg Abbot began to tweet about Biden taking their burgers.

If you were a pundit who has fretted about climate advocacy's ability to connect with middle America, you might ponder why Biden would choose Hamburger Hill to die on.

But there was something eerily all-too-familiar about the speaking cycle and outrage -- it felt a lot like the fictions spread about alternative energy sources after the storms in Texas, or Biden neutering Mr. Potato Head and banning Dr. Suess -- it had the clear ring of disinformation.

So, what was the truth of BurgerGate?

World War Zero investigated. Disinformation can pop up anywhere -- often introduced into social media feeds -- the information bloodstream on Facebook or Twitter. But in this case, it was the notorious and unreliable, right-wing British tabloid Daily Mail that planted the seeds of this hoax.

In January 2020, Donald Trump was still president, the University of Michigan published a study entitled Implications of Future US Diet Scenarios on Greenhouse Gas Emissions.

The study wasn't funded by the government or Biden, who at that time was a private citizen with a Presidential campaign on life-support.

Fast forward to April 22, 2021. It's Earth Day, Joe Biden is president and the United States is hostinga virtual Leaders Summit on Climate, attended by over 40 world leaders. In his formal remarks, President Biden boldly declared he was setting a goal for the US to cut greenhouse gases in half by 2030 -- double the goal of our commitment in the Paris Agreement. Without ever mentioning meat, President Biden said:

The United States isn't waiting. We are resolving to take action -- not only the -- our federal government, but our cities and our states all across our country; small businesses, large businesses, large corporations; American workers in every field.

I see an opportunity to create millions of good-paying, middle-class, union jobs. I see line workers laying thousands of miles of transmission lines for a clean, modern, resilient grid. I see workers capping hundreds of thousands of abandoned oil and gas wells that need to be cleaned up, and abandoned coal mines that need to be reclaimed, putting a stop to the methane leaks and protecting the health of our communities.

I see auto workers building the next generation of electric vehicles, and electricians installing nationwide for 500,000 charging stations along our highways. I see … engineers and the construction workers building new carbon capture and green hydrogen plants to forge cleaner steel and cement and produce clean power. I see farmers deploying cutting-edge tools to make soil of our -- of our Heartland the next frontier in carbon innovation.

By maintaining those investments and putting these people to work, the United States sets out on the road to cut greenhouse gases in half -- in half by the end of this decade.

That's where we're headed as a nation, and that’s what we can do if we take action to build an economy that's not only more prosperous, but healthier, fairer, and cleaner for the entire planet.

That same day, Daily Mail "journalist" Emily Crane published the article: How Biden's climate plan could limit you to eat just one burger a MONTH, cost $3.5K a year per person in taxes, force you to spend $55K on an electric car and 'crush' American jobs.

Without a shred of evidence, she wrote:

Here's how it could affect everyday Americans

Cutting red meat consumption by 90% and animal products by 50%

Americans may have to cut their red meat consumption by a whopping 90% and cut their consumption of other animal based foods in half.

Gradually making those changes by 2030 could see diet-related greenhouse gas emissions reduced by 50%, according to a study by Michigan University's Center for Sustainable Systems.

To do that, it would require Americans to only consume about four pounds of red meat per year, or 0.18 ounces per day. It equates to consuming roughly one average sized burger per month.

Where did she get this information if not directly from the President's remarks you might ask? Perhaps from his press secretary, or maybe from his climate team -- Gina McCarthy or John Kerry -- anyone within the US government, or climate advocates in Congress?

No. She was not reporting an actual policy initiative. She repeated stats from the aforementioned University of Michigan study -- the same independent study that was published over a year before Joe Biden was president -- and the same study that no one from the Biden Administration has ever quoted, let alone expressed support for anywhere, ever.

This is how disinformation begins.

The very next morning on April 23rd, Fox & Friends took the Daily Mail article and blended it together with their signature style: fear mongering. BIDEN'S COMING FOR YOUR BURGERS! 4TH OF JULY IS CANCELLED!

Part of the climate or green targets are to cut our red meat. He wants to cut 90% of the red meat you all eat. Thats 4 pounds per year.

The elites will find a way their way to get that ribeye steak if they want to. For the rest of us it would be let them eat kale. You will have the kale, we will have meat. Listen, four pounds a year, thats my weekly consumption of red meat at minimum, so that's not going to work.

Get this: America has to stop eating meat, stop eating poultry, fish, seafood, eggs, dairy, and animal-based fats. OK, you got that? No burgers on July 4. No steaks on the barbie. I'm sure middle America is just going to love that. Can you grill those Brussels sprouts? So get ready: You can throw back a plant-based beer with your grilled Brussels sprouts and wave your American flag. Call it July 4 green.

It was only a matter of time before the Biden burger myth took Twitter by storm. Once Fox News riles up their base -- which includes sitting members of congress and governors -- there is no going back.

On April 25th, fact-checking website Snopes weighed in on "Does Biden's Climate Plan Include Cutting 90% of Red Meat From Our Diets?" and declared it FALSE.

Because the Daily Mail is a British tabloid and not involved in American climate policy discussions, and because Biden's plan has not yet been released, claims that it includes a policy that requires a 90% reduction in red meat are "False."

Even Tom Vilsak, the widely respected Secretary of Agriculture was forced to weigh in:

There is no effort designed to limit people's intake of beef coming out of President Biden's White House or USDA ... Sometimes in the political world, games get played and issues are injected into the conversation knowing full well that there's no factual basis.

Fox News host John Roberts was one of the first to spread the meat myth by declaring: "Say goodbye to your burgers if you want to sign up for the Biden climate agenda." But three days after his initial false reporting, he admitted on-air that he was wrong by stating "A graphic and a script incorrectly implied that it was part of Biden's plan for dealing with climate change. That is not the case.

It was a rare mea culpa by a Fox News host, though he was only one of many culprits and it was too little, too late.

We endured a week of "news" about a declaration of war on red meat -- based on a government plan that doesn't exist and a year-old university study that has never been commented on by Biden or his Administration.

But tens of millions of Americans were presented this big lie as if it were truth in their daily news diet -- damage done. It's disinformation that's clogging our information arteries, not red meat.

Disinformation is like that saying about how you can't put the toothpaste back in the tube -- once it's out, it's out.

And there's no better example of this than House Minority Leader, Kevin McCarthy, repeating the meat myth on Fox News, days after it was corrected on air on the very same network: "He's going to control how much meat you can eat. Can you imagine that?”