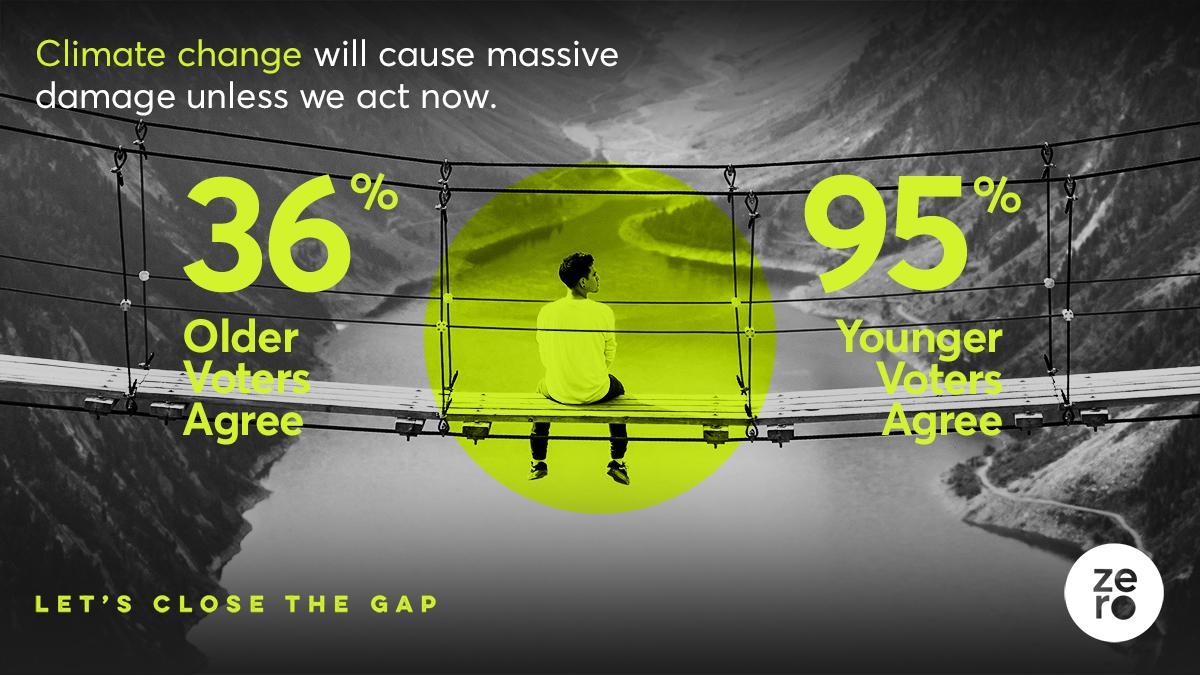 by Beth Hansen and Paul Tencher
Share this story

Can younger and older Americans talk with each other about the climate crisis?

World War Zero’s research tells us the answer is: “Yes, but…” And, that but is the problem, as it signals doubt. In response, we’ve made it our mission to turn that “yes, but…” into “yes, and…” so the conversation can build and build.

Already, so much ink has been spilled over the generational divide on the issue of climate. Consider: “OK, boomer” -- used by millennials and Gen Z as an ‘“instantly relatable cry of frustration” toward older generations. Or, the headline: “Feeling Warm, Boomer?”, underlining that same frustration in regard to climate.

Even though we both sit on opposite sides of the aisle, we agree that few in the policy arena have looked at ways to bring younger and older Americans closer together on this issue. We also agree that the passion of young people may be the key to effectively reaching their network of parents, grandparents, and others in their community on the issue of climate.

Young people striking for their own survival can push and prod, scold and shame, but sadly they can’t convene a decisive meeting in the Situation Room, gather shareholders in a Board Room to align sustainability with a bottom line, or vote on the floor of Congress or in parliaments everywhere.

In other words, with very little time left to take the bold actions needed to avoid the worst impacts of climate change, how might we help younger people with passion and purpose be most effective when speaking with older people who still hold enormous political and economic sway today?

We approached this mission first by defining our own strategies. Both of us come from decades of working in politics where we’ve strived to create persuasive policy and compelling messaging. We also included input from youth activists, leaders in the environmental community and political operatives—both Democrats and Republicans—with years of experience. The following are three core strategies we settled on as essential for effective communication:

Familiarity + Trust: The most persuasive conversations are between people who know and trust each other -- family friends, and neighbors.

Make it Personal: People care about things that affect their own lives, communities, and families -- especially their grandchildren.

The Right Messenger: What people believe and how they respond doesn’t always align. This doesn’t come down to just the message, it’s often the messenger.

We didn’t stop at our own experience, though. We also teamed with Geoff Garin and Jay Campbell of Hart Research, one of America’s leading opinion research experts with a long history tracking audiences’ changing views about climate change. From there, we polled in search of the best ways for young people to bridge the divide with their older relatives and friends -- and grow the coalition of those committed.

What did we find?

94% of YG and 82% of OG agree that “companies and the free market can do a lot to help address climate change.”

93% of YG and 73% of OG believe “It is possible to both combat climate change and grow our economy.”

Bridging divides -- the key is urgency, and lack thereof

95% of YG believe the science on climate change is clear and requires immediate action.

Less than 40% of OG share that certainty,thinking there’s time to wait.They aren’t sold on the proposed window for action closing so soon, or that climate change is indisputable.

However, half of YG assumes OG views climate as an issue of economics and national security.

Knowing what to say

Almost three quarters of YG say they don’t think a conversation with OG will change their mind, and that they want to avoid getting into an argument. 60% of YG admit they simply don't know what to say that might change OG minds.

77% of YG say they’ve tried to talk to OG about climate, but only 23% of OG remember having such a conversation.

OG says they will listen to and want to hear from YG about the climate crisis. In fact, 90% of OG say they’re willing to have “the climate conversation” with a young person in their life.

How the OG thinks the YG is most effective and persuasive:

For us at World War Zero, the takeaway from this research is simple. Because young people have large networks, they also have a wide reach and a high potential for meaningful and successful interactions. Young people also have an opportunity to be more persuasive and impactful in conversations by learning -- rather than assuming -- what matters most to older Americans. In line with our initially proposed strategies: Familiarity + Trust, Make it Personal, and The Right Messenger, young people will be most effective if they bring their passion, clarity, and facts to those who care about them most.

World War Zero is building one of the largest grassroots climate activist lists in the country and giving our enlistees the technology, tools, and content to help reach our 2020 goal of creating 10 million climate conversations. This research was critical to our efforts to put our enlistees to work online in their community.

Beth Hansen is a Republican and co-founder of the Kasich Company, a strategic consulting firm. She was campaign manager for John Kasich’s 2016 Presidential campaign. Hansen was chief of staff for Gov. John Kasich (R-OH) from 2011-2018 and served 11 years on the staff of U.S. Senator George Voinovich (R-OH).

Paul Tencher is a Democrat and a strategy consultant. He has been a senior adviser to five U.S. Senators. His policy and business consulting has taken him from the Rust Belt of Indiana and Ohio, through the rise of Detroit, to the tech corridors of New England.